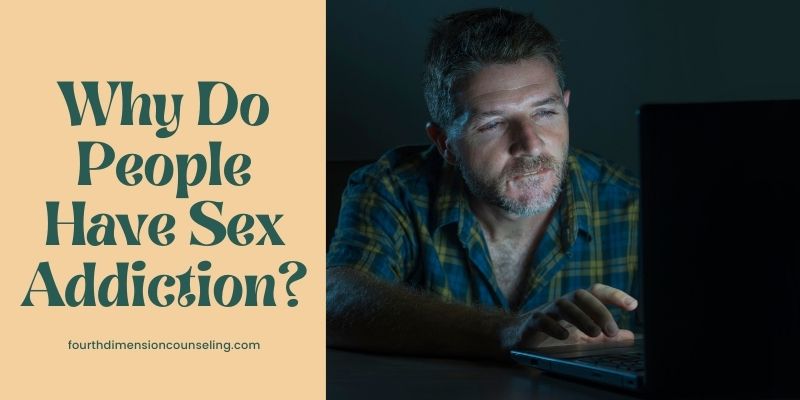 Sex is a healthy and pleasurable activity. But sex addiction is a self-destructive behavior that can have a devastating effect on the victim, often leading to the breakdown of marriage or relationship. It may also impact the victim’s career or work negatively.

Although sex addiction is still a subject of debate among psychiatrists and medical professionals, as there is no universal acceptance on the nature of compulsive sexual behavior; whether it is a disorder or habit. However, studies have shown that some individuals may develop abnormal sexual behavior due to a number of reasons.

Common among the reasons for sex addiction is childhood traumatic experience. Most often than not, survivors of physical, emotional, and sexual at childhood or adolescence develop illicit sexual behavior leading to sex addiction.

Research has shown that victims of sexual abuse often try to recreate the occurrence of their past trauma as an outward manifestation of inner pain, by engaging in violent and unprotected sex, sex with multiple partners and often do not have their sexual impulses under control. According to Dr. Patrick Cranes, a sex researcher, 97 percent of victims of sex addiction had suffered emotional abuse as a child or adolescent, while 81 percent had suffered sexual abuse, and 72 percent suffered physical abuse. This strongly supports the assertion that victims of emotional abuse often respond to past trauma by engaging in illicit sex behaviors which results in sex addiction.

Related: 8 Signs to Look for in a Sex Addict

Genetics may also be a cause of sex addiction. More than likely, certain genetic makeup has the potential to increase ones’ chance of sex addiction. Since its been proven that genetics account for several other forms of disorder and addictions, and all addictions work in the same part of the brain, it is not far-fetched that genetics contributes to compulsive sexual behavior. Like other addiction, it is a chemical imbalance in the brain which affects dopamine receptor— a part of brain reward center— This genetic imbalance magnifies the pleasurable effect of sex, leading to an increased risk of sex addiction.

Early initiation to sex can also affect a child’s sexual behavior. Exposing a child to sexual activities through sounds or touch, at a significantly unusual age can increase the chance of sex addiction. It has been shown that the lower the age of exposure, the higher the chances of a child being a sex addict.

Similarly, having a Sex or drug-addictive partner can increase ones’ chance of developing sex addiction. Over time, the illicit sexual behavior with a drug or sex addict becomes the new normal for their partner.

Sex addiction can have a detrimental effect on your marital life and career resulting in an incessant feeling of guilt and low self-esteem. It is therefore important that you seek the support of health professionals once you recognize this trait. There are a variety of therapeutic interventions to help you recover and get your life back to normal.